Guest Post by Essie Fox - plus Prize Draw to win a signed copy of The Somnambulist!

THE SETTING THAT INSPIRED MY NOVEL…

What could be lovelier at this time of year than a walk in the English countryside, with everything so fresh and green you can almost taste the sap in the air?
These days I live in London, but I often return to Herefordshire and have such happy memories of childhood walks in the local woods, where I used to run along sun-dappled paths, where the darkness around seemed magical. But I always stayed very close to my mother. I never wanted to go and get lost, because who knew what monsters those trees might hide.
The romance and mystery – and fear – of those woods went on to inspire my novel. The heroine, Phoebe Turner, is raised in the bustle and grime of East London. But then, one hot summer she leaves her mother to work in a sprawling country house – and that house is surrounded by miles of woods where Phoebe often wanders alone, unaware of what dangers and secrets might lurk in those shadows... 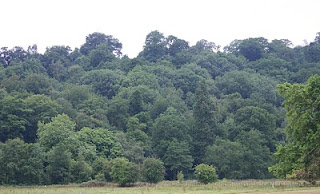 ‘My skirts brushed against the damp grasses. Directly ahead trees were steaming with moisture almost as if they were living and breathing. I hesitated, and all Nature’s sounds seemed to hesitate too, as if those woods sensed my arrival, the stranger about to enter their dawn realm of dappled green gloom.’
The house in which Phoebe goes to live is as real and alive as those woods to me. It has haunted my thoughts for many years, ever since those Sunday afternoon drives where, on one particular route, I would peer through the car’s back window and see tall iron gates looming out of the verge, and beyond them a long straight gravel drive at the very end of which was a house – and the feelings I had on seeing that are echoed on Phoebe’s arrival …

‘I shivered and yawned with exhaustion, finally letting my eyes droop closed – only stirred when Jim pushed my head from his shoulder, when he jumped from the cart to close up some gates which, being of iron, very heavy and large, made the most horrible clanking sound. And now, wide awake from that raucous alarm, as we drove on past expanses of lawns, nothing prevented my view of the house – a central square tower above an arched entrance, castellated walls running either side, and so many windows, I couldn’t count – and each one unlit and unwelcoming. But, as the moon’s face broke through fast-scudding clouds I saw something else that quite took my breath, the thing that was lying behind that house, spreading upwards and outwards for several miles: the dense, sloping woodlands that glistened like silver. And, being quite overawed, and sounding far more like Old Riley than me, I exclaimed, “Strike a light! What a wonder. I’ve never seen so many trees in my life.”’

I always felt a tingling excitement whenever I saw that view. To my fanciful eyes it seemed to be the setting for a fairy tale, and surely a sleeping beauty must be hiding somewhere within those walls. But, as the house was privately owned no opportunity ever arose to see if my suspicions proved true – until one hot summer holiday when I came home from university and was offered the job of a cleaner; a post I accepted immediately, and though not particularly fond of the work it did give me the chance to explore every room and soak up the wonderful atmosphere – a mixture of mediaeval splendour combined with the later Victorian wings. One moment I was polishing ancient suits of armour, the next I was dusting ornate sets of china, or changing the linen on four poster beds, or gazing into the orangery; a glass house designed by Paxton who also constructed the Crystal Palace that once graced Hyde Park for the Great Exhibition of 1851.
Hampton Court in Herefordshire – renamed in my novel as Dinwood Court – really is worth a visit today, if only to see the redesigned gardens which are absolutely glorious, or to sit in the elegant café converted from Paxton’s orangery – though personally I’d much rather see it filled up with pots of palms and ferns. And perhaps, when you’ve had your cup of tea, why not venture on up into the woods and imagine my heroine’s spirit there – just sleeping, just waiting to come to life.
***

Essie Fox’s debut novel, The Somnambulist, is a Victorian gothic mystery published by Orion Books on May 26th. To be in with a chance of winning a signed copy, leave a comment below and we'll draw the lucky winner's name out of a silk-lined top hat.
Essie’s website is: www.essiefox.com
Essie blogs as the Virtual Victorian: www.virtualvictorian.blogspot.com
The Hampton Court official site: http://www.hamptoncourt.org.uk/
Posted by Caroline Rance at 06:00

I love this. i grew up near some woods that I still visit + that still take my breath away :)

I can't wait to read your book, Essie. I'll be sure to visit Hampton Court in the summer when I venture down south. Great post.

I'm fascinated to read this, Essie, because am currently engrossed in The Sonambulist and was just this morning thinking that you portray the setting so vividly. It really comes to life and there are some fabulous descriptions of the area. Enjoying the book very much.

Great post. I'm enjoying the book very much, too.

Essie, this book sounds wonderful! Just my cup of tea. I totally relate to being inspired by forests – that contrast between the beauty and danger. A lot of my writing is inspired by fairy tales, and forests have an important significance in those stories. Really looking forward to reading your book.

How atmospheric, and love the addition of the photos too. Huge congratulations on the publication of The Somnambulist, and I hope to get to read it, once my move is sorted...
Susiex

Thank you all so much - it really is an atmospheric place.

If you do venture 'south' Jackqueline, I'd suggest visiting Croft Castle too. It's about ten miles away from Hampton Court and it provided me with some more inspiration for the house's interior layout which ended up as a hibrid of the two.

I'm also very influenced by fairy tales, Kirsty - even more so in the book I'm trying to write at the moment.

And Susie - loving the new avatar!

I still think the cover alone is divine:)

what a fabulous post, Essie, I can't wait to get my hands on a copy of The Somnambulist now I've had a taster for it here - and such a beautiful, inspirational house, lovely images.

Sounds intriguing! Thanks for joining us Essie, and good luck with it!

Thank you everyone - just waiting to know who the winner will be. I'll be in contact as soon as I can.

And thank you so much, Strictly, for giving me the opportunity to post. Always love it here!

Sounds interesting - I love a good Victorian gothic. I hope I'm not too late to be in with a chance of winning!

Sounds great and your post does tickle the old fancy to read more!

Thanks everyone who has entered the draw so far. The competition is open until Wednesday 8 June at 6pm and the winner will be announced on Thursday.

Hi Essie
How fantastic you got to work in your 'fairytale' castle and soak up the atmosphere. I love books inspired by real places - in fact, for me setting is a huge part of he reading - and writing experience. Looking forward to The Somnambulist.
AliB

I enjoyed your post and 'The Somnambulist' sounds as though it will be a great read: it's now on my reading list. I too remember places from childhood that seemed to be endowed with special qualities of mystery and magic that we never quite forget even in later life.