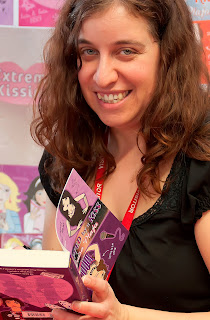 Luisa Plaja author of Split by a Kiss and several other teen novels, reports on her new writing project.
---
From Friday, 6th May 2011, I’ll be working on a novel for Fiction Express , a new project launched by a children’s book packager called Discovery Books where e-books will be published in weekly instalments.

Each week, young readers can vote for the direction they’d like the story to go in. Authors then have a couple of days to write the next chapter… and so on, for eleven weeks. There’s reader interaction all the way through, and there should even be opportunities for readers themselves to be written into the stories.

When I was approached to be one of authors involved in the project, my first thought was, “Ooh, fun! And not a million miles away from the way I write anyway!” Perhaps I should point out that, up until now, I have never asked teenagers to vote on the course of my plot. What I mean is that I rarely plan my stories in advance. I am a ‘pantser’ of the highest order (by decree of the Association of Pantsers, which formed spontaneously from a random group of aimlessly meandering synopsis-dodgers). As a three-time NaNoWriMo ‘winner’, the ‘no plot, no problem’ approach to first-draft writing usually suits me down to the ground. I am just not a planner.

Of course, it soon occurred to me that a project like this isn’t entirely about pantsing skills. For starters, I won’t be able to use my usual method of finishing a first draft and then going back to the beginning and editing so much that barely a single line remains from the original. Once my chapters go live – cue spooky music and dry ice – there will be no going back. There is only an unknown path forwards, decided on by readers. Eeek! And yet, I think it will be amazing to have this type of interaction with readers.

It’s going to be a challenge. But I think it will be a thrilling one. *small voice* Wish me luck?
---
Fiction Express is launching with four titles in different genres: Diary of a Mall Girl by Luisa Plaja, The Soterion Mission by Stewart Ross, Soul Shadows by Alex Woolf and The Last Symbol by Rebecca Morton.
You can read free first chapters, sign up and join in with Fiction Express at http://www.fictionexpress.co.uk from 6th May 2011 onwards, and keep up with news about the project on its Facebook page:
Posted by Caroline Green at 06:00

I think this sounds like a fascinating project...and probably the start of an interactive revolution.

I could see my own children loving something like this.
HBx

I can't wait to read this! Good luck!

You're a brave girl - but what fun!

Sounds great! I'll be checking it out.

Thanks very much for all the lovely comments, everyone!

What a brilliant idea - I do hope it goes really well and the ideas flood in. Very exciting.
Susiex

How exciting! That sounds like something my daughter would love.
Best of luck with it all, you must be very brave!