Leaving a little something to the imagination

One of the arguments you always hear when a novel is televised or made into a film is: ‘it’s not how I imagined it to be when I was reading the book’. We all know the disappointment of seeing our favourite character badly translated onto screen: I know that, for me, much of the disappointment of The Hunger Games film was that I felt it was badly miscast (as fine an actress as Jennifer Lawrence is, to me she was too Amazonian to play scrappy, starving Katniss) and I am, frankly, dreading seeing well-known short-arse Tom Cruise playing the 6’5” hero of Lee Child’s Jack Reacher novels when the film hits our screens this year.


But how does that issue affect you when you’re actually the person who wrote the characters? I’ve been spending a lot of time promoting my book Dark Dates, lately, while also starting to work on the sequel. One of the questions that regularly comes up in interviews is ‘who would you want to play the main characters on TV/in a movie?’ – and I admit it’s one which has me stumped. I can think of a few ideas to play the central male figures, Cain and Laclos (and the secondary male characters, like the Counsel) – Charlie Hunnan, Tom Hiddleston, Ben Browder, Timothy Olyphant , Jason Isaacs – but if I’m honest, this is just me drawing up a list of men I fancy and would like to be in the same room as (I’d get to do that as a writer, yes? Yes?) When it comes to the central female character Cassandra, I’m utterly clueless: and in part, that’s because I was deliberately vague in describing her. There’s hardly any clues to her physical appearance in the book, because I wanted her to be an ‘everywoman’ of sorts: someone we can all imagine being. Tying that down with lots of concrete details would have spoiled it for me.
One area where this has practical implications, though, is when you start thinking about the book cover, and promoting the book. Often, particularly in the urban fantasy genre, covers have figures on them: in much the same tradition as romance books, they like to draw you in with gorgeous people. Of course, if you’re going down the self-publishing path, as I am with this book, that gives you the issue of paying for models (or roping in your most photogenic friends and using very good lighting) – but I think even if I had the money to do that, I think I’d be against it. It’s far too easy to slip into cheesy; to make your heroines look like glamour models and your heroes look like Fabio, or  to make your monsters silly rather than scary - and then you've scuppered your book before anyone has read the first page.
When I was working with my cover designer, Caroline Goldsmith, we deliberately chose to use things that were significant to the story, but steer away from actual people. In working on the promotional material for the new book – you can see the teaser below, and a trailer for it here – we worked with images of London, as the city is such an integral part of the action. If you’re going to use one of the world’s most striking cities as a backdrop for your book, surely it makes sense to utilise that – and leave the rest up to the readers’ imagination?

As a closing note – if you’ll excuse the geek out – I’ll include this warning about book covers from one of my favourite TV shows, Supernatural: which has the wonderfully meta storyline of the main characters, Sam and Dean, having their lives turned into a series of novels within the show. Which turns this… 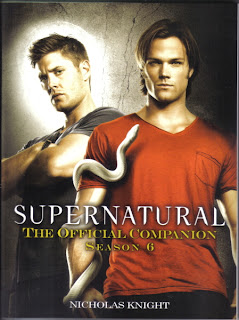 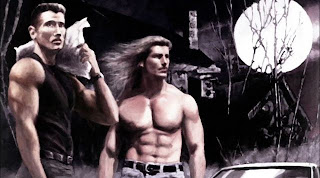 See what I mean about putting people on the cover?
What do you think? Do you have favourite covers which feature characters from the book? Let me know!
Posted by Thrifty Gal at 09:30

I think a few details help to make the characters distinct, but describing anyone in detail can rob us of the pleasure of imagination.

I favour a cover that suggests the themes or flavour of a book, without depicting the people. It's probably different for another genre such as romance.

An interesting parallel is in films, where a main character can be played by different actors while still embodying the spirit of the script or original novel, such as Jack Ryan, John Connor, Robert Hannay, or Bruce Wayne.

I've never liked to see any faces depicted on a book cover as, like Derek said, it spoils the imagination. I don't mind a few limbs or half a body or something but to me, if I'm being given a face then I feel a bit cheated and hand-held.

I freakin' love book covers! I want to design them as a living when I'm older, or at least work in the process. :)

The Fallen series by Lauren Kate have gorgeously dark covers designed by Fernanda Brussi, a Young Brazilian woman. Each feature the main female character, Luce, of the novels, however, they never show her face, which I love.

Another series of books in which I love the covers is by Becca Fitzpatrick which star either Patch, Nora or both of them through out the series. These two characters are portrayed well in the covers, through stance & posture. Yet, again their faces aren't shown clearly.

Also, the Need series by Carrie Jones just shows sections of the main character, Zara's face, though it doesn't exactly give away her true physical features, if you think about it (you'd have to read the series), yet does at the same time. Yes, I sound confusing, sorry lol! Anyway, they're eye catching & the images fit the character & the story line, in my opinion :)

Loooooong comment! Sorry! Lol! I just love book covers. I think every great book should have a great cover. It should reflect the amazing adventure within its bindings. The multiple series I mentioned above do folllow my belief... Well, the Fallen series covers can be deceiving, I think. No offence to Lauren Kate, but I prefer Brussi's talent with photo manipulation. However, that could just be me!

Okay, well, Im going to end this now, before I type any more! Haha!
Bye :)

Thanks for the comments. Morrigan I agree that the Fallen series is a good example of figures being used well on covers, I really like how they look.

Yeah, I actually did a project on Fernanda Brussi, the artist behind the covers.
Most, if not all, of her work feature figures. She has an amazing talent ^_^
You should look up some of her work! This is her portfolio, on Deviantart: