Back in the subbing game - guest post by Jo Carlowe 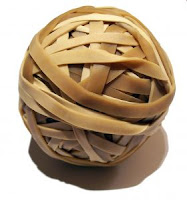 Wrestling with elastic bands, the disappointing thud on the doormat of a returned manuscript and that: ‘From Pitch to Publication’ plug shamelessly inserted into agent Carole Blake’s rejection letters.


For me all the above sum up the self-flagellatory process that typifies the book submissions’ process.


It’s been a while since I’ve done this – in fact it’s been nearly eight years. I recall the routine the first time round. It was gruelling and exhausting. It did eventually involve me being signed up to an agency and riding that rollercoaster of false hope. It ended without a book deal and the realisation that if I wanted to pay my mortgage and raise a family then I’d better put aside such a foolish dream.


Nonetheless, I made a promise to myself – once the kids were old enough and I had a little more time, I would write fiction again. It’s a pledge that I’ve kept and it’s been every bit as enjoyable and fulfilling as the first time I set pen to paper.


Last week, I decided I was finally ready to seek out an agent. So I bought a copy of the Writers and Artists’ Yearbook and read the advice section convinced that in this digital age, there would be differences of which I should be cognisant.


But to my shock, nothing had changed. I assumed that in the years that had passed, agents would not only accept emailed submissions but would insist upon this (it’s environmentally the right thing to do). I was wrong. When it comes to adult fiction, agents still, for the most part, request postal submissions.


Even the guidance was the same: lots of stuff about proper elastic band usage, correctly spelling the agent’s name and not playing fast and loose with font selection (Wingdings being an obvious no-no).


It is as though time has stood still. Everything is as it ever was. My only hope this time, is that the outcome, at the very least, will be different.


Jo Carlowe is a freelance journalist writing features on health, psychology and lifestyle. She is working on her novel: ‘Fly-By’ – a contemporary adventure love-story. www.jocarlowe.com

As I write for children, I did find it surprising that so few agents for adults stuff take email subs.

Good luck - these are nail-biting times.

And I, too, am surprised that so few agents ask for email submissions these days. But if I want to read something thoroughly I always print it off and curl up in a chair with it. So if it means they are more likely to read than hit the 'reject' button, then we must do as we're told!

My first publishing contract required work to be submitted on floppy disks! :) But yes, there's still a lot of 'post only' stuff out there - I wonder if it's in part to do with some idea of quality control? People tend to take more time with letters than emails... hmmm. Best of luck with the submitting process! :)

What I don;t understand though, is the fact that children's book agents are largely happy to receive email subs. You do get a few who prefer postal ones, but not many now...

It does seem so strange, given that they could upload email subs to their Kindles and read them anywhere.
Very best of luck with your submissions, Jo, and well done for keeping your pledge to yourself.
Susiex

Hi Jo, commiserations on your manuscript rejection. The plus point is, of course, that they asked to see it in the first place. You say that things have stood still - not true, things have got harder. If you're getting a request for a 'full' then it speaks highly of both your writing and your agent selection skills.