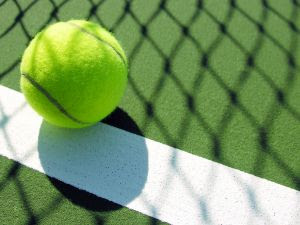 Every year, the Great British Public carry out a strange ritual. For two precious, sunny (hah!) weeks in summer, we secrete ourselves in our living-rooms in front of the box to experience, vicariously, the pleasures and pains of Wimbledon. If we’re really keen, we may even buy strawberries and cream, or wear a silly tartan hat with built-in red hair. Under extreme pressure (atmospheric, usually) we may even stoop to sing-a-long-a-Cliff.

On the courts, the players, too, are behaving oddly. They devote almost more time to a frenzy of superstitious and illogical actions than they do to their game: blowing on their palms, adjusting their bra straps or their sweatbands, refusing to let go of the ball that won them the previous point and, in Andy Murray’s case, pumping his fist in a rather lewd manner and pointing vehemently into space in a strange gesture of victory. Djokovic bounces his balls (steady) up to 25 times before serving. Nadal is obsessive about the positioning of his drink bottle, clearing the court lines with his shoe and adjusting the rear of his shorts.

Which brings me to the power of the ritual, and to wonder what exactly the difference is between a ritual and a habit, particularly where it applies to us writers?

I guess the difference, for me, is that a ritual is something which is a) consciously chosen and b) is carried out in order to enhance the spirit of an experience - whilst a habit is something one feels driven to do, is mainly unconscious, and can be detrimental to the project in hand. My worst habits are: reaching for chocolate or crisps when things get tricky – or, indeed, when they’re going well; and surfing the internet between sentences. My best rituals? Applying the seat of my pants to the seat of a chair and writing regularly in the mornings, sandwiched between a stretch routine and a brisk walk.

Julia Cameron, author of The Artist’s Way, writes that, under pressure, she returns to using an old-fashioned electric typewriter. She finds the rolling-in of the paper, the return of the carriage, a soothing and affirming ritual. Most of us get obsessive about word-counts. 2,000 words a day, or four hours in front of the computer? Some insist on only using moleskine notebooks, whilst others must write in longhand, (or in cafes). I know writers who prefer to light a candle or play certain music in order to evoke a suitable atmosphere. Some of us even have particular outfits for writing (these may include pyjamas). Our writing times are particularly ritualistic: for some, it’s a matter of getting up before the family and using the quiet, early morning hours. Night-owls prefer, well, night-time, while others choose a scattergun approach, tapping out a few sentences between checking emails, jumping up to answer the phone, making a cup of coffee, or cleaning the kitchen floor.

We writers are sensitive souls. Perhaps we value ritual so much because it provides a safe ‘container’ for our ranging imaginations. And for those of us who don’t have ‘a proper job’ (a whole other blogpost), we need to create some kind of schedule or boundary in our day. Within such limits, our creativity feels nurtured and protected. And however weird or outlandish such rituals may be, they’re as vital to our output as Djokovic’s bouncing, Murray’s pointing and Raffa’s shorts.

Anything else wouldn’t be – well, tennis.
Posted by Susie Nott-Bower at 06:00

Ah yes, surfing the internet between sentences. Guilty as charged.

Actually I'm getting loads of writing done this fortnight because I hate tennis (yes - really.)

Ah, Helen, 'tis a heinous crime! :)
Well done, MorningAJ - I have to say the opposite's true for me, but it's only two weeks...
Susiex

Perhaps it's a control thing. We control one thing in order to presume control over something else. In the old days that was called sympathetic magic, but it probably has a new name now.

Like that, Derek. I've never heard of sympathetic magic.
Susiex