I'm Ready For My Close Up 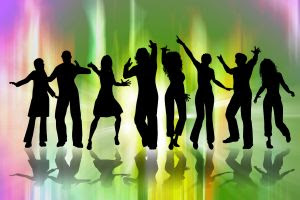 Like so many women d'un certain age I am a member of a book club.

I'd like to say that we are an eclectitc and funky group...but in truth we are bunch of Mums who have kids in the same school. We are all married, over forty and have a pair of white linen trousers hanging in our wardrobes.

Attending my book club is without the doubt the most middle class thing I have ever done.

In its defence, though, we are a loud and opinionated bunch. We don't sit around politely nodding our heads. Discussions are often heated. Plus we all drink like George Best after a month in rehab.
Shouting is a common occurance, crying is not unheard of.

Anyhow...we were asked by a TV company to review a book for a chanel four programme and we agreed.

At first we began to fret about what we would say, but that was soon brushed aside as paranoia over whether we could all lose a stone in three days settled in.

The book in question was The Lantern by Deborah Lawrenson, a compelling tale set in a deliciously rural and run down Provencal farm house. It's being featured, quite rightly, as a big Summer read, given that each page is redolent with the scent of endless lavender fields, and the idea was for us to review it in a similarly sunshiney vibe at a pub on the river with the light glittering off the water and our wine glasses. White linen trousers a go-go.

Naturally, on the morning of the shoot it was pissing it down. Not a small shower or what my Mum charmingly describes as 'spitting', no this was proper rain. And wind. And cold.
My club mates wondered if filming would be cancelled or at least postponed, but if I've learned anything from writing it's that sometimes you have to work with what you've got. So I wore white trousers and sunglasses almost as an act of defiance. One of my mates kindly brought a plastic carrier for me to sit on, pointing out that a wet bum is never a good look.

In the end we filmed inside. Which was fine...but by God do these things take time. We filmed for over three hours which will probably translate into about three minutes of telly. I was very pleased with what I thought was a snappy little soundbite: 'A great Summer read for the thinking Summer reader.' Pleased until I had to repeat it about fifteen times...it had, to be honest, lost its shine by then and I'll cheerfully let it drop from my cannon.

Time and again the camera guy changed his angle, checked the light, asked for a repeat. Little was left to chance and I was reminded of the writing process and how you just can't tell how much time and effort goes into making something work. Indeed the easier it looks, the more seamless the end product, the flipping more time consuming the project is.

In the end when the shoot wrapped (get me with my insiders lingo) we all went away with a new found admiration for the graft behind the scenes that no-one sees...
Posted by Helen Black at 06:00

Email ThisBlogThis!Share to TwitterShare to FacebookShare to Pinterest
Labels: Deborah Lawrenson, The Lantern

Helen, weren't you tempted to leave copies of your latest book lying around??
I love the image of the white linen trouser'd brigade. Alas, I too have a pair. Can I be in your gang? x

I look forward to seeing this, Helen! Having been filmed myself for a slot on Teachers' TV about teachers who do other things in their spare time I have some insight into the length of time it takes to film what turned out to be a fifteen minute slot. Two days in my case. It's exhausting, isn't it?

I knew there was something missing from my life - I'm off to buy white linen trousers ...

When I see the clip, I'll bear in mind the gruelling process behind it :o)

What fun. The bit about losing a stone in three days made me laugh. We made a film for a client recently so I can relate to the - saying it over and over again - bit. I hadn't seen the analogy with the writing process. Nice one. Here at SW we can find a metaphor for writing in anything.

Very funny, Helen! Shame the white trousers went to waste.
As to how long filming takes, all I can say is, try doing it with a bunch of five year olds who want to do it the once and move on to the next fun thing...
Susiex

It is amazing how long filming takes. My daughter was in a film last year, which was fascinating for me to see just what went on from that side, and she had to go into a sound studio last week to lip synch with herself certain lines where the highly sensitive sound equipment had picked up extraneous noises and slightly spoiled the original lines.For just 6 short lines it took 2 hours!

Then we could all wear one. With our linen trousers.
HB x

White linen trousers! I've never even dared own a pair of white jeans let alone these - not because I'm NOT of a 'certain age' but because I know for certain they'll be spoilt before I've even pulled the flippin' zip up on them.
Also like Rod, loved the 'weighty' issue as opposed to what shape filming would take - such fun!

Looking forward to seeing this on telly, Helen. Having been involved in filming a documentary, I know how time consuming and cumbersome it is for the poor participants. Plus, having to repeat oneself over and over again does get frustrating!

Before I became a writer I worked for BBC current affairs. Some of these investigations would last for months, with teams of cameramen, production meetings, scriptwriting, safety forms, and days and days of studio editing at the end. But there would also be the bit that I specialised in - undercover stings with hidden cameras. One chance, and five minutes to either get it right or throw away weeks and weeks of work. Sooo...an awful lot like writing - long preparation, lots of input from others, and lots and lots of editing - but also sometimes the only way forward is to just go for it, and fly by the dseat of your pants (your white linen pants even)

Your book group sound like a lot of fun!

I don't have any white linen trousers. With me they wouldn't stay white for very long, but now I'm feeling left out ;-)

I've stumbled across your blog and couldn't resist saying hello - and leaving a comment to say thank you for all you went through!

Believe it or not, the weather in Provence was foul for filming too! (Whoever would have thought??) My own white linen trousers remained in the wardrobe, as did all of the clothes painstakingly chosen to take STONES off as I wandered about in the sunshine that never was... Ah, well, life is not always as we write it.

Please do pass on my heartfelt thanks to all in the group. I do hope that, in general, you liked the book. Too late for me now if you didn't!

All the very best,
Deborah

Can't wait to see this, Helen!