The hubster is away this weekend playing golf, for the first time encouraged by me, because I have SOOOO much to do... I’ve been head down trying to finish the WIP and I'm at the point where I can see the finishing line, almost touch it. In the meantime, I’ve been eating and drinking crap. I’ve put weight on in the last week– now have lardy lady writer’s bum – and I think I’ve become a little antisocial. 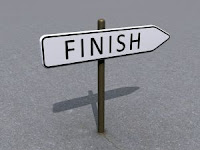 For instance, the phone just rang. Three weeks ago, hell even three days ago, I would have at least leaned across the desk, looked at the caller I.D and decided whether or not to answer the phone. Now, I can’t even be arsed leaning, I am so immersed in what I have to do. I’m drinking copious tea and coffee, marginally better I know than my normal copious amounts of sauvignon blanc, but I’m wired in a sort of exhausted way.

Yesterday, I forced myself to take two breaks. One was a trip to Sainsburys - where I bought two melons, a mango, a packet of paracetamol and two packets of chocolate fingers (buy one get one free). Oh and six toilet rolls. I have so far consumed both packets of biscuits and thought about making a fruit salad, while stacking the loo rolls on the loo roll stacker thingy. My second break yesterday involved watching a movie the hubster had ‘sky plussed’, where there were so many plot holes that I needed the paracetamol and ended out yelling at the television ‘Just die, asshole!’

In the meantime, two thousand words must flow before my next break. I know what scene I have to write. Thinking about it, I’m smiling and I realise this is why I allow myself to become a fat recluse every now and then. I know what I have to do and I know the words will soon begin to flow. I’m excited because in the next few minutes my characters will take me far away from loo roll stackers and fruit salads.

But the phone is ringing again. Persistent little bugger. My daughter’s voice speaks on the answer-phone. ‘Mum, you have to eat. Come out of your cave for a few hours. We’re having a ‘Barbie’ at three. Be there.’

That sounded very much like an order. I wonder briefly when exactly that role reversal took place? Did I not notice it because I was too busy in my cave? I check my wrist, 10:05 and look out my office window. It is a lovely day. If I don’t take a break until then, I could get an awful lot done. I could even take a fruit salad with me.

Must go. ..Things to do... Imaginary places to be... Then must make some time for the real world.

Sounds like you're on a roll.
Gof for it, I say. The real world will still be here when you're done. And frankly, it's often not what it's cracked up to be.
HB x

Wow, Fi, that's impressive. And slightly scary. But yes, this world under our fingers feels much more real at times than the one out there. Enjoy - and Eat That Fruit Salad.
Susiex

Now I realise FFS must stand for "flippin' fruit salad"! good luck and hope it flowed the way you wanted it to. It's too hot for a Barbie anyway, writing's way cooler - in an anti-social way of course.

I loved this! Lots of lol-ing. Did you make the fruit salad in the end?

So what have you nearly finished, Fi? first draft of novel?

Good luck, anyway. Just remember to poke your head out of your cave for the odd bit of fresh air:)