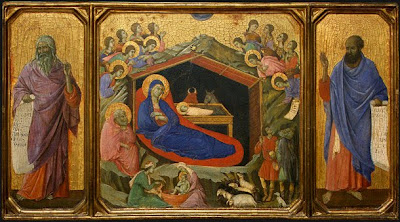 Rod and I were chatting the other day about what makes a story. However intricately plotted and carefully executed our writing is, if the basic plot lacks drive, it will be returned to sender. Whether it engenders faith in us or not, the Christmas story is unbeaten in dramatic terms and worth a seasonal snout to see what we can learn from it as storytellers. It makes Hollywood, with its overblown and crass Good v Evil schematics, look anodyne.

In the Christmas story the most powerful entity ever sneaks back into his creation to help set right its wrongs. That’s clear archetypal characterisation plus major mission. Where can you possibly take such superlatives? The Almighty can, after all, do Whatever. The story needs a major obstacle. Bring him back as a baby! Defenseless, incapable of communication or movement. The ultimate boss disguised as unskilled worker on the shop floor.

Add to the mix-for-he-who-hath-everything a teenage girl, lost in a strange city, in labour and homeless. Add lairy wide boys in the form of feckless shepherds who turn out to have hearts of gold. Add three of the most gifted and talented chaps of the day, then make them responsible for the grossest act of stupidity in the whole plot, spilling the secret beans to the Wrong Man, thereby bringing about mass infanticide, with our protagonist, omniscient but useless, as target. By this time, heavenly hosts with fetching wings and guiding stars seem mere set dressing.

The core story is lonely and bloody, terrifying and uplifting. How is it told? Bluntly. Conversationally. Plot twists that defy belief are jotted down by the Gospel authors with factual brevity. Nice counterpoint. Such an overblown plot can only gain authenticity from understated telling.

What can we learn from this? Be braver and bigger and bolder in our ideas than we think is right and proper. Why not? There is no Story Demon out there issuing permission slips as to what we may write. Why be diffident? Push the story to the limits of credulity to discover whether a better plot springs from such audacity. Be unlikely. Get your hands dirty in unknown realms. Bring in a broad social mix: a world leader wants to hack off the head of an unmarried teenage girl’s newborn, when he’s never met either of them. Why?

This coming year is the 400th anniversary of the King James Bible. The courageous broad strokes of its storytellers have a lot to offer us as authors. Dig in. But first, wherever you are in your scribbling and subbing and plotting and panting, stop. It’s time for a total mental and physical break from writing. Time to pop corks, snap crackers, gaze vacantly at candlelight, sneak a hazelnut praline while basting the bird, indulge our sentimental souls with carols and our children with toys that won’t shut up. I’m having a day off from the constant boil and bubble of ideas, and I hope you do too.

Posted by Susannah Rickards at 14:04

Lovely post, Susannah, I never thought of The Greatest Story Ever Told as... well.... the greatest WAY to tell a story - ever.... food for thought. Talking of which - baster to be found....Happy Christmas to you too!

Great post, thanks Susannah. Can I take this opportunity to thank everyone who has read Strictly Writing this year. Wishing everyone a brilliant Christmas and a very creatively fulfilling 2011.

Love from the Strictly Team.

What an excellent, engaging and insightful post. I also would like to wish our readers a merry Christmas and a prosperous new year.

Happy Christmas everyone from Rod in our favourite Italian restaurant in Spain!

Brilliant post, Susannah. I've been watching The Nativity on telly and also listening to the nativity story at various carol concerts and on the radio and as ever I am always held spellbound by the simple telling of the story.

Hope all you Strictlyians are having a brilliant Christmas.

And a Happy Christmas to all the Strictlies!

I love this! I never looked at Biblical or any religious tales in terms of plot...but as they are originally oral tradition, there must have been some elements of good story writing in them for them to be good stories when told aloud.

I really enjoyed reading this post and it really does make you think.
Hope you had a wonderful Christmas and new year