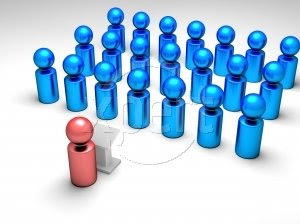 Writing is, by its nature, a lonely business. There may be the odd freak of nature who can tap happily away on their laptop in a crowded cafe with half a dozen strangers peering gormlessly over their shoulder, but for most of us, quiet and solitude is essential. For me, certainly, it's all part of getting inside the heads of my characters; to "become" them, I have to forget that I have a life outside of them, and create a vacuum for myself. It's a strange, internal process, but one which most of us perform without even thinking about it. There's only one problem: if you manage to get published, you have to start sharing your work with the world. But that's what we want, I hear you cry. Of course. I totally agree. Let thousands of people read my novel, if they so desire (and I hope they do) - in the comfort of their own homes, on the Tube, in the bath, wherever takes their fancy... as long as I don't have to read it to them.
The awful truth dawned on me a few months ago. In order to help try and shift a few copies of my book, I was going to have to stand up, in front of people - REAL people - and read it out loud. Not the whole thing... that would be madness. In a way, though, I would actually prefer that. At least then my audience would be able to judge the book in its entirety. If they didn't like it, fine - well, not fine, obviously, I'd probably lock them in the room and refuse to let them leave until they had written a four-page essay on their reasons why not, but at least I would know they were making an informed decision. But a mere couple of pages? A couple of pages, chosen almost at random by me, taken totally out of context and declaimed to a load of strangers? Not bloody likely. But of course it was likely. It was unavoidable. I had made my bed, and now I had to lie in it.
I did my first set of readings in November, to various assorted sixth formers as part of their A Level English lessons. As I sat there and read, knees knocking with fright beneath the table, trying and failing not to hate the sound of my own voice, it struck me that this was actually a peculiarly effective form of torture. I wouldn't be surprised if it had already been taken up by some of the murkier militant organisations. Forget putting your victim on the rack - if you really want to make them suffer, get them to pen a few couplets and then read them out loud to the guards. As I stumbled through the pages, I must admit that I wasn't too sure how my words were being received, largely because I could hardly look at my audience. Speaking the sentences I had written, they suddenly seemed cringeably juvenile and inane. It was a disaster. I was a failure. I would never write another word.
At least, that's how I felt during the first lesson. By the fourth, it was a different story. No, I hadn't suddenly become the last of the great orators, but somehow, it all started making sense. This was my book. I had written it, and they were damn well going to listen to it. They weren't pelting me with rotten tomatoes; in fact, mostly they looked quite interested. And afterwards, they crowded round and asked me if it was going to be made into a Hollywood film. OK, I had to say that as yet there were no firm plans on that front, but even so... Overall, I found reading my work aloud to be much like the experience of jumping into a freezing cold lake. Difficult to gear up to, a shock to the system at first - but the more you splash around, insisting that the water is lovely, the more you start to believe it.
Posted by Rebecca Connell at 08:26

You're very brave! But you're right, you do have to get some publicity to sell your book. I know it's not on the same scale as your experience - I haven't got a published novel - but reading a few words that I've written out in front of the writing group I attend used to grip me with terror, until I became more confident. The more you read out your work to people the easier it becomes, well it did in my case. I no longer have the cold sweat and shaking knees and voice syndrome that I used to!

I've only ever read my work out to my kids (primary age) - which i really enjoyed! I agree though, i would be terrified of doing it to someone else.

I find that when you stand up and read aloud, you aren't focused on the content, but more on your own presentation. And of course you can feel all the eyes upon upon you.
An interesting insight Becky :)

I totally agree, Becky: reading aloud prose you've written is the worst thing about book events. Especially bits you think are funny - and then nobody laughs. (Been there, done that.)

Best thing I ever did was a joint launch with a friend whose book was out the same month as mine. We read aloud our favourite passages from each other's book - and said why we'd chosen that passage. That way we both read with no shame and with complete conviction!

Really enjoyed this, Becky.
I went to see one of my favourite authors, Sarah Waters, reading a while back. I later read the very passage she chose in the privacy of home and it made me cry because it was so powerful, but when she was there, in the flesh, I found myself admiring her shoes and not really paying attention.
I'm not sure whether this is helpful to know, or not!

Thanks all! I do think it will get easier and easier...well that's what I'm hoping anyway! I would absolutely hate to read out anything that was meant to be funny though. I can just imagine the deafening silence now...

I love reading my work aloud! (I know, I know, it's weird...) What really freaks me out is question-and-answer sessions or interviews. Reading our my writing is fine - I know what's coming, it's there on the page: but what if someone asks me something I can't answer?!?
Susiex

I haven't yet read out any of my work to an audience (apart from the dog, who is deaf anyway) but I think it will feel far more embarrassing than just writing and delivering a speech. Fiction is different, somehow.

I agree with Susie that answering awkward questions would be far more scary, though! Going on TV or radio would be horrible.

I also love reading aloud and find it impossible to identify with your nerves, Becky. I expect you'll grow to love it sooner rather than later.

Interesting post - but I have to say that I'm with Geraldine in that I love it (thought pre-reading nerves are familiar!).

Crumbs. I have to do this soon and my book is purporting to be funny. Argh. Yowl. Tremble.

I've only done this once before and it went down well but the thing you said about total conviction is what rung true with me. I remember trying to get myself in a frame of mind to do it properly and it being so hard because i could almost feel myself retreating into a shell. So, in the end, I concentrated on the idea that I was amusing my boyfriend and friend down the pub. They were both in the audience and I knew they were there. So I tried to focus on that mindset.

I don't know if I'll be able to do it again. Becky - you might be there so you'll have to tell me.

Oh the fear! The Fear!

It's comforting to know that some of you do actually enjoy the experience! I just found it very odd, and I kept wanting to stop in the middle and say, "am I boring you?"!

Rosy, I'm sure you'll be fine and that there will be some hearty laughers in the audience... unfortunately I'm not very good at guffawing, I tend to go more for the wry smile.

I sympathise with both views on this one - when I've read aloud, I was nervous beforehand, but then relaxed into the reading and did actually enjoy it. On one occasion, though, I had to quickly skip a bit, when I realised my supposedly adult audience at a library included a couple of kids! And the reading I'd chosen was humorous but ... adult! That threw me!

Interesting post and not something I've had to tackle...yet (and hopefully never?). But you're right, it's a part of it, and the very idea has me running for the cellar!

Well done on overcoming the obstacle!

Nice to see you here, JB.

I think the problem for me, Becky,also, is that unless you learn your extract by heart it's not like public speaking, where you can look around and get few supportive smiles from the audience - or simply see proof that people are paying attention...

I think my main fear would be reading from the page and hearing whispering, ie i've lost the audience's attention.

I'm sure that'll never happen to you though!

Loved the post - especially since I'm about to have to do some readings - afraid to admit to myself that my knees turn to jelly-o at the thought of it...comforting to know that others feel the same and that it can be got over!! (; ) Thanks.