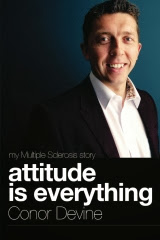 Irishman Conor Devine went from being a successful business entrepreneur with a glowing future to a shadow of his former self within a matter of weeks. At the age of 28 while on his honeymoon he began experiencing a range of frightening symptoms, ending up in hospital on the paradise island of Mauritius. It was a devastating start to married life and Conor was eventually diagnosed with Multiple Sclerosis.

He has penned his journey in a new book: Attitude Is Everything and it's an inspiring 'bible' for anyone on a journey similar to Conor. Now a champion of MS and an advocate of healthy living and adopting a positive mental attitude, Conor, a qualified Chartered Surveyor, hopes to inspire others with his formula for success.

I read the opening chapters with a pounding heart – the initial symptoms that took hold of Conor – the pins and needles, balance problems and pressure in his head, the dash to hospital and his isolation on a strange island, the place where he should have been celebrating the start of married life. Back home Conor undergoes investigations to find out what this mystery virus is, and then his world grinds to an abrupt halt when he is told he has Multiple Sclerosis, a neurological condition that affects nerves in the brain and spinal cord. He is riddled with anxiety and stress and his future looked uncertain; his career and football brought to a halt.

After a short period of dwelling on the condition and allowing it to weigh on top of himself, Conor decides to grab life and adopt a new, positive approach, fuelled by his strong spiritual faith. It pays off as he manages to suppress his symptoms and go on to lead a relatively normal life. Now Conor is the successful principal of GDP Partnership which specialises in the field of real estate and corporate restructuring and he is a keen sports enthusiast, regularly taking part in marathons and triathlons.

Readers of Attitude Is Everything: My Multiple Sclerosis Story can follow his inspirational path of staying positive and adhering to a healthy diet and exercise plan and see how, no matter what befalls you in life, that it is possible to overcome everything.

Visit Conor’s website at www.conordevine.com where you can read more about his experience and buy a copy of his book.
Posted by Gillian McDade at 05:00

Thanks to Conor for sharing his incredible experience in this book.

I love reading such motivational stories. It does pay to challenge oneself in a very positive way.

What a fantastic young man. I'm have way through the book

Thanks for sharing such powerful and personal story.

Wow. Such an inspiration,Conor, thanks for stopping by :)