Self-Promotion: A Guide to How Not To Do It 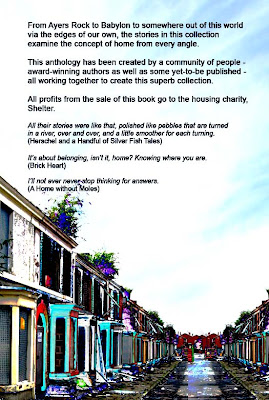 Part of the reason I am a particularly unsuccessful self-published author is the fact that I'm also a terrible self-publicist and/or marketeer.
I don't do 'pushy'.  I can cajole, convince and steer during conversations, but give me a head-start on a two minute slot where I can openly tout my wares and I'll be a tremulous wet mess before you can say 'fer Gods' sake, spit it out woman'.

Case in point last weekend.  We were out at a brother-in-law's house (yes, the same one from 'that other' post here) and everyone was going on about what they'd been up to and what was happening currently in the Real World.
Mention was made of guttering, plumbing systems, restoring an old Volvo, the temperatures we are currently experiencing and the terrible wages your average care worker receives.

There was scant talk of anything that was happening in My World.
And in My World lately there had been BIG THINGS.  But if you've been up to your knees in the care of re-plumbing an old Volvo in this heat, then chances are it probably hasn't hit your radar.
So... *ahem*. Nothing.  *Aaaah-HEM!*
Start BIG, was my plan... and usually I can get away with being a little 'outbursty' by reason of My age/My disposition (not sunny at the best of times) and/or My Occupation (that's the literary one and not the paid one you understand).
"I have a book out today" I said as proudly and as nonchalantly as possible.

Nothing.
And then...
'Oh My God, really?' came a reaction.  'What's it about? Do you have it with you? Where is it?'
*this is where I run out of puff - other people's expectations are FAR higher than my own I think.
"Okay - *still smiling* It's called STORIES FOR HOMES.  It's an anthology.  I have a story in it along with about 60 others."
'What do you mean? You didn't write it?'
"Well I have a story IN it.  Oh, I also designed the cover which I'm really....."
'So where is it?'
"Well.. it's an e-book - so it's... y'know, on Amazon.'
'You mean a Kindle book?'
"Well, yes, you can read it on a Kindle but you don't have to have a...."
'I haven't got a Kindle.  I can't see what all the fuss is about....'
"You don't need a Kindle to read an e-book - you can get a Kindle App for anything. I haven't got one, I download my books onto my pc and ..."
'You don't have a Kindle but you've published e-books? How does that work?'
*some time later*
'So how much are you getting for it?'
"It's for the charity, Shelter, so, nothing.  It's all for charity."
'Oh.' *definite disinterest*
"We're planning a paperback in the Autumn, though."
*murmur, mutter, back to the Volvo action.
This, people: THIS is why I get so heebie-jeebie about trying to announce anything to anybody in that place called the Real World.  They just don't get it, do they?
So - for those of you who DO get it, can I please proudly announce the birth of the wonderful 'STORIES FOR HOMES' anthology which is available to purchase on the Amazon Kindle site (and you DON'T have to have a proper Kindle, you really don't).
All proceeds are going to the charity SHELTER and we have been riding high on the Amazon Kindle charts for the past week since it came out.
My story is No.27 and I might have mentioned I designed the cover too - did I?
*shrinks away because blatant self-promotion is excruciatingly embarrassing*
BUY IT!
....Please?
Posted by Debs Riccio at 15:04

Hi Debs - I do sympathise. I've decided I am fine with bigging myself up on a page (web or other) but when it comes to spitting it out in front of people I just dry up or hide. ~Even find it hard to take a compliment about it without mumbling, blushing or feeling foolish. And yes, people mainly just do not 'get' the whole author thing (print or e-book) unless you can say you are a best seller. Currently about to promote an anthology a bit like yours (still under wraps) and realise I am putting 10 times more effort into it than I did for my own novel.
What's that about?
Glad I'm not alone.
I think we need more practice!

Haha, great piece and too true.

I fully sympathise. I should love a copy of this book and I think the cover is gorgeous. I'm looking forward to it very much. x

Ali it's good to know it's not just 'me'. Like you, I can happily - well, more easily - push away on FB and Twitter (they're just buttons and keys aren't they and not really 'real') but it's when you have to compete with daily chorey things that it gets so difficult, isn't it?
Joanna, get your copy NOW and I hope you enjoy it. Actually I know you will - it's really rather excellent :)

I think you've hit upon the key, which is that any promotional work has to be something you're either comfortable with or re willing to learn to be comfortable with. Initially, I'd say go with your strengths. There appears to be so many ways and means of getting your message out these these days that it makes sense to focus on those that give you the least stress. That way you'll put in the most effort. Failing that, you could always hire a publicist!

I love your cover and I think your book looks like it could be a good read. All best with it. MaryJ