When your job gets in the way... 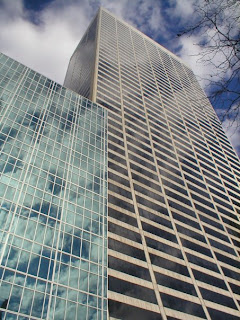 I'm proud to say that my day job gets in the way of what I love doing most - novel-writing. There, I've said it to the entire world - it's a thorn in my side! How I envy people who can get up in the morning and not care about what surprises the company has in store, those who can go to sleep without worrying how he or she will ever tackle the following day's work. And how I envy people who can just get up and switch on their own computer in their own comfortable office and pick up from chapter 12.

I've been especially irked these past two weeks as it's National Novel Writing Month which you will be well aware of. Gah! When I'm sitting at my desk strewn with shorthand notes and post-its, and being constantly interrupted by Joe Public, I grow insanely jealous of the writers who have hit 1431 words by 10am. I've managed to get around 3,000 words written since November 1.

But I'd be lying if I said my journalism job was a waste of time. You see, ALL my novels and short stories are based on real life events. Not events as a whole, but small events within events: a kind of microcosm. From 'A River To Cross', set in North Korea, to 'Cake' (the Victoria Sponge murder!) they're all partly true to life. Even 'Cake' started out after I read an article about a woman losing in a Victoria Sponge contest. But I took this character to the extreme and made her become a cold-blooded murderer, and instead of just taking it on the chin, like the lady in the article did, MC Muriel (who kindly guest-blogged for us here!) seeks revenge. She won't rest on her laurels until she achieves maximum satisfaction. The factual stories I encounter every day give me fodder to use in novels. On the way back from a story, I often think how this would pan out into a novel. Maybe it's a comment someone has made, or something I've overheard? And the Dictaphone is handy too - I can talk to it while driving!

If you open the papers, there's always a story that can be worked on, from the bridge results in the local papers, to a global story like Madeleine McCann. I just don't understand when people say 'I can't get inspiration.' Of course you can - go and look out the window. Open the paper and look at a random photograph. Even leaf through Ok! magazine. It's another way of making sure your story is original and stands out among the other submissions.

So if your day job gets in the way, use it to your advantage, like I do. Make the most of what you've got until you don't need it anymore. Wink, wink.

Pic of office block in New York, taken by myself.
Posted by Gillian McDade at 06:00

So true, Gillian. Most of the material which inspires my novels comes either from observing people and interactions and personalities at work or ditto at home, with family and friends. Going to work or being a mum or just out shopping or socialising - nothing is ever wasted!

I have to say that I sometimes miss work - the sense of structure it brought to my life. At the same time, I feel really lucky to have lots of time for writing and a small part-time job which gives a little bit of structure and interaction with the world. Actually, I think it's the sense of IDENTITY that I struggle with. In a job, you can say 'I am an x'. When you are an unpublished writer...
Love the picture, by the way!
Susiex

It's so true... a quick flick through a newspaper should cure most cases of writer's block.

Personally, I find myself most inspired by paintings and photographs - particularly vivid landscapes, and portraits of 'interesting' faces.

Personally, I'm losing the battle with work. So it's good to be reminded of the silver linings. And I love the picture - the way the building seems to bend.

What a great post Gillian - it's nice to know I'm not the only one who feels this way. I particularly liked the line "make the most of what you've got until you don't need it anymore"...definitely words to live by! Thanks for the inspiration :)

I do think it is very easy to see life without work as idyllic though. I've only done 5000, despite only working very part-time, and one reason has been sorting out problems with builders and dealing with family commitments.

In other words, real life does get in the way of writing, but it also provides a lot of the inspiration, whether that is a ratty boss or gossipy morning at Toddlers Group.

I concur! I have used being at home with my eight month old son to my advantage. I have even had some articles published about it.

Even though being s fulltime mother may not be construed as work in itself it does come with its disadvantages as well as advantages.

So I try to make the most of my time on the laptop and reading wgen I get a chance to. But I'm sure you can sympathise at the difficulty with me for having an energetic baby which never sleeps!!!

Thanks for all the comments - it's heartening to know others feel the same!
As regards the photo, I think I should become a pro photographer too, as well as an author!! ;)

I do work, but from home, and I do miss the interaction with the rest of the world!
Which is, er, probably why I spend far too much time online..
Great post, Gillian.

Good point about the interaction, Caroline! Thanks for the comment!

Hi Gillian. I happened to come across this blog because I plugged in a novel contest search into Google. I don't know what the blog has to do with that yet, but I'm glad I happened by, because I can certainly relate to the whole work/writing problem. However, I don't get a whole lot of inspiration from work. I work as a software engineer in a hospital. BUT... I DO get a lot of inspiration from lots of other places. My problem is finding the time to get it all down on paper somewhere. When you work at a "day job", you really have to be structured and disciplined with your writing. I take my breaks and make sure to write nonstop during them every day, when I can. So that's my piece of advice I'd like to dispense to all those day job people. Be disciplined and write every day, even if it's only 1/2 hour a day. Good luck to you Gillian and to all writers everywhere, no matter what your situation. :-)

Lovely photograph, I thought it was professional.

Love the photograph. Personally, I need structure in my day. It seems the more I have to do, the more I get done! I can bedcome lazy with everything, including my writing without some sense of structure. Walking to work is often where I find inspiration.

George - so glad you stopped by! You're absolutely right about being structured. And if you have problems getting the notes jotted down, record them instead on a Dictaphone! So easy to do.

Thanks again for the comments!

Working a day job (or two, as is my case) can be so frustrating! But it's true that I get a lot of inspiration from the people and situations that I encounter. It's a hard act to balance but it can be worth it in the end!

Thank you for such an inspiring and true post!

I absolutely agree, Gillian. When I was at work I used to find myself thinking about whatever short story or novel I was working on, and wishing I could get home to get on with it - despite being frantically busy (working in the NHS). BUT the opportunities for inspiration were fantastic. Lots of my short stories, and my third published novel, were set in hospitals! I used to worry me that
I wouldn't be able to come up with so many ideas when I left work - but somehow I've managed, so far! And the advantages of giving up the day job are SO worth it!

It's so good to read a blog from a real person and a writer, who worries about work and word-counts.