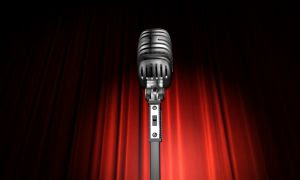 I’m a very recent convert to the X factor. We only started watching it as a family because our ten-year-old convinced us he would be a social pariah at school if he wasn’t able to confidently discuss who is in and who left (weeping) over the weekend. I liked to think I was a bit take-it-or-leave-it. But that all changed when Lucie Jones got voted off on Sunday. I finally understood Simon Cowell’s Machiavellian reputation and very much wanted to throw shoes at the telly.
Now there isn’t a huge amount in common between standing on a stage, singing overwrought pop songs, and being a sensitive, shy flower who likes to write stories, but it certainly isn’t without parallels. Whenever you show your work to another person, let alone stick it in an envelope and send it off to an agent or publisher, you’re offering up something from deep inside yourself. It’s like saying, ‘Here is a little part of me, so be nice,’ [I appreciate WB Yeats put it better]. And it can’t be a dissimilar cocktail of resentment, disbelief and hurt to hear someone say, ‘Sorry, love, I just don’t think you’ve got what it takes to go the whole way’ as, ‘we didn’t feel sufficiently inspired by your work to offer you representation.’ Although I have to admit that it’s nicer not having your writing rejections witnessed by millions of people.
Or having to take advice about music from Louis Walsh.
But amidst the disappointment, there is something strangely comforting about seeing the only singer you really rated in the competition being voted off. There really is, it seems, nowt queer as folk. So when an agent says, ‘This was good but it just wasn’t for me,’ it isn’t always code for, ‘It’s rubbish and I hate you, you talentless loser.’ Sometimes, it really was good.It just wasn’t to their taste.
• On the subject of the X Factor, check out YA writer Emily Gale’s brilliant new novel, Girl Aloud, in which tone deaf teenager Kass Kennedy is unwittingly entered for the competition by her manically up-and-down dad.

Great post, Caroline! I switched off the X-Factor for the first time ever since for my mind, the whole contest had turned into a farce the previous week with the voting off of the first girl in the competition.

You can never overestimate the British public when it comes to taste, as they say, and they have confounded even my expectations on this one.

I hope it backfires on Cowell and others stop watching too now they have such blatant proof of his Machiavellism.

The difference between writers being rejected and these kids, apart from it being in done in public with them, is also their tender age. I hope that we can take it more easily as we grow older. But a rejection so early in life is much harder to take.

I dunno, i can understand why Lucie went off. People sometimes forget this programme is called the X FActor, not the Singing FActor - and Jon and Edward, like it or not, for the kids are entertaining and have something about them. Something different.

It's the same with books. One can be beautifully , skilfully written, but it's got to have that magic ingredient we'd all like to get our hands on, to sell.

Jon and Edward are simply the Katie Price of the singing world. Simon's not stupid. Why do you think he's got so much money?

Oooh, I dare not say anything for fear of igniting a fierce x factor debate...
I vowed on Sat night never to watch the show again as I feel very strongly it has always been penned a 'singing competition' looking for the next big 'recording artist'
They are now sending mixed messages to those that have watched for years and I for one am voting with my fingers.
That said, this post is so true. I speak as someone who's in submission mode which of course, put another way, means steel yourself for some rejection mode.

Fionnuala, do it! Light that touch paper!

Sam, my son and all his mates can't stand J&E...when it came to the final vote, he was bouncing on the chair shouting, 'John and Edward are going HOME!'
But I see what you mean about being the Katie Price of singing. Although it is a bit depressing when this stuff succeeds at the expense of quality.
Great point about the age difference, Geri...

Should have been clearer there...I meant my boy was cheering just before Simon Cowell's sneaky decision...

Well, you're talking to someone who loved Chico, so maybe i'm not the best person to comment:)

The thing is, no-one I know or have heard talking about it even likes Jedward, so who the heck is voting for them???

Great post though - my novel's out there at the moment so I'm waiting for my own 'you're fired' moment! Although that's another show altogether ...

Great post, Caroline. This is why I prefer Strictly (both Strictlies!) to the X Factor, though I do watch it a bit. I think the whole JedWard thing is an Emperor's New Clothes scenario, and SiCo is playing it very cleverly. There's nothing different about these two except that they are twins and are pretty. But if enough fuss is made about something, people will begin to take notice. I s'pose that could be said of the writing business too - Dan Brown??
Love the analogy between X Factor and subbing - on BBC Radio Oxford's series of writing for publication, someone said that there were two 'x factors' which make an agent read on: voice and confidence. And I think confidence is really important.
Susiex

Caroline...clearly I enjoyed your post (thanks for the plug!) and I think you're right to draw this comparison - SiCo (love it, Susie) et al are the equivalent of the "gatekeepers" to the publishing world, but it's the public who do the voting just as it's the public who do the book buying...meanwhile poor Jedward/Dan Brown get a huge bashing but walk away with zillions...though in this case I suspect that Jedward will walk away with tuppence or so, like that strange brother-sister act who have surely now been demoted to panto...? Yes, it's a farce, but it's a bloody entertaining farce. I just hope my book isn't the Lloyd of the competition...(sorry, Lloyd).

Now you see all these references to Lloyd and Chico are lost on me! I'd never seen it before this series. But I think I can take a guess and say you will NOT be the Lloyd...
Susie, I also think 'SiCo' is brilliant!

Can't really take credit for SiCo - I think Cowell's company is called SyCo, or something!
Susiex

I finally shared one of my published stories with an old friend whose opinion I value. His response that most surprised me was that he didn't know I was a writer! How could anyone not know that about me, I wondered. And yet I think I am, too, a shy, retiring person who happens to write. (P.S. He thought the story was good and said I was a "serious" writer.)

Well done, Paul. That must have felt pretty darned good.

Great post, thanks! I love the analogy with publisher's rejection - yes, Lucie going does make you see that talent is sometimes thwarted. I hope lovely Lucie keeps on keeping on, just like we all must, no matter how many times we are "just not right" for whoever it is!