Not even the NYPD will stop me... by Gillian 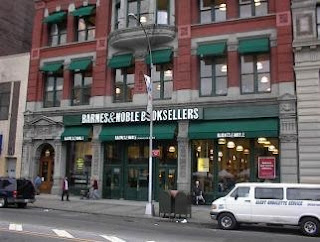 Just as an avid reader will have a favourite book, there will be another bookworm who has a favourite store. For me, it's the branch of Barnes and Noble in the Gramercy/Flatiron district of New York. Nestled in Union Square, the store boasts a relaxed atmosphere and unlike a lot of other bookshops, you can browse (and read!) until you heart's content.

Gleaned from Wikipedia...Barnes and Noble, dating back to 1893, is the largest book retailer in the United States, many of which have a Starbucks instore - yum, smell that coffee. There are 798 shops across the 50 states. And apparently the original bookstore was located at 31 West 15th St, having opened during World War I. This one at Union Square has featured in several movies, including Conspiracy Theory (1997, featuring Mel Gibson).

Having visited in early 2007 and went on the rampage with my credit card (nine books bought in total, including some hard-to-find-in-the-UK Larry McMurtry), nothing would stop me in my quest to re-visit this Barnes and Noble the following Christmas - not even the yellow tape the NYPD uses to seal off crime scenes! Seeing the police tape stretching out in front of me as I meandered down Broadway, my heart pounded. The light canter turned into a fully-fledged run....closer...then closer.....phew....thankfully the tape had just about spared the door of Barnes and Noble (and was attached, I think, to Bath and Body Works, or Sephora instead) so I went in for another visit. Never mind the full-scale alert, I was inside.

The ground floor can be quite crowded and the aisles between the books are narrow, given that there are quite a few (overly large) square presentation tables squeezed in. And from memory, the large thick cream-coloured pillars do nothing to help. Upstairs is much better, with large aisles, making manoevrability easy, and there's a lot more space to put the shopping bags, particularly along the front section near the 'Upstairs at the Square' area. Barnes and Noble also seems to have a policy whereby browsers are welcome to sit down and read for a few hours - I assume that's what the chairs are there for. My only gripe is that it can be very warm in winter as the sun streams in through the large windows - many customers will be suitably attired with heavy coats for the December chill.

You'll probably have heard of the 'Upstairs at the Square' event which pairs musicians and writers for an evening of words and music. Please note, these are available to download as a video podcast and are well worth a viewing on your ipod. Some interesting combos include Ian Rankin and Aidan Moffat, William Gibson and Martha Wainwright, Anne Enright and Camphor, and a few I'm kicking myself I missed - Aimee Mann and Joseph O'Neill, David Lynch and Au Revoir Simone and Nell Freudenberger and Howard Fishman.

Book fans will also be pleased to know that Barnes and Noble is celebrating national 'Turnoff Week,' (April 20 to April 26 in America), with activities offering alternatives to television, the Internet, electronic games and other screen related activities. And this comes during the month it announced it's about to enter the e-book market by providing a rival to the current readers, so it's all go at Barnes and Noble. As a caveat, I must mention the many, many independent and indeed much smaller bookstores in New York, as well as those second-hand shops which time didn't allow to visit. They do a great job, holding their own in an expensive city which is monopolised by the giants. The Argosy, Three Lives and Company and St Mark's are all worth a visit. If you're in New York, do drop by Barnes and Noble, go upstairs and feast your eyes on the lovely quad area where one day you might be reading an excerpt from your novel.
Posted by Administrator at 19:05

Email ThisBlogThis!Share to TwitterShare to FacebookShare to Pinterest
Labels: Barnes and Noble, New York, Upstairs at the Square

Gillian, this gave me a fuzzy feeling - not because I've ever been to Barnes and Noble (or, come to that, New York) but because of how lovely it is to have 'special places' which resonate and feel like home. I like going to Waterstones in Picadilly, because you can sit in their very comfy seats and browse to your hearts content there, too. And then off to the Hare Krishna cafe in Soho (but that's another story...)
Susiex

I loved reading this post, as I love bookshops in general but have never (yet!) been to New York.

It's ironic that I'd just, sadly, written a post on my own Blog about my own favourite bookshop closing down, before reading your post. But my shop's an independent.Not many of them left.

I have very fond memories of visiting Foyles in London, as a child. And a little independent in my childhood village.

Shopping habits change as time goes by though, and with children in tow my bookshop visits are brief and specific - usually i take advantage of the convenience of Amazon.

Thanks for the comments Susie, Olivia and Sam. If you are ever in New York, do take time to browse bookshops, and make sure you pay a visit to all the little indies too. There are so many of them.

It's funny, Gillian, because I loved everything about New York on my visit there....apart from the bookshop! I was looking forward to it hugely but for some reason I just didn't feel as home in the huge one I went to. And it's not because I'm against Borders-style shops. Actually really like them, in fact.
Maybe I just picked a bad day...
Interesting post, anyway!

That's interesting Caroline! I suppose what kind of mood you're in also impacts on the visit.
(We don't have any Borders in NI, but I imagine them to be hugely commercial!)