Not even a massacre could put out the spiritual fire.... 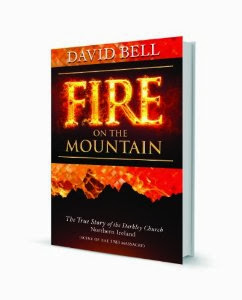 In 1983 the Troubles in Northern Ireland reached a sickening low with a depraved and evil attack on Mountain Lodge Pentecostal Church in the small village of Darkley, nestled in a predominantly republican area of South Armagh, Northern Ireland.

Armed with weapons, gunmen opened fire on three elders in the entrance hall during the church service, killing them. The gunmen then turned their weapons on the congregation of around seventy which had gathered for their weekly service. Nine members were injured in the attack. The three men who died were David Wilson, Harold Browne and Victor Cunningham. Nobody was ever arrested or charged with the attack, responsibility for which was later claimed by the Catholic Reaction Force, a cover for the INLA, in supposed retaliation for loyalist murders.

A gripping new book wonderfully titled ‘Fire On The Mountain’ by Pastor David Bell, written to celebrate 60 years of the church, revisits that night in November 1983. It's a moving tale of Christian community spirit told sensitively as the people struggled to rebuild their lives. It gives a fascinating insight into the life of the church over the decades, highlighting the many miracles of healing that went on following the tragedy, some of which defied even medics.
Readers are drawn in right from the outset and they are taken on a journey, meeting the many people involved in the church, some instrumental in making the church the success story it is today. And it's difficult to see how the people managed to keep the faith in the face of adversity, but it's all here in black and white. Their steely determination, but above all, their trust in God kept them spiritually alive, the book outlines.

In 'Fire On the Mountain', that horrific moment of the shooting is recalled in vivid detail:
“For a moment, we all thought someone was throwing pebbles against the outside of the window panes, on that wintry November 1983 evening. It sounded just like the rattle of small stones on a tin roof. After all, very few of us had ever heard the sound of gunfire before. Falling to the floor for cover, we realised all too quickly what was taking place – somehow our church had become the latest target in the Northern Ireland ‘Troubles’. After what seemed an eternity, the sound of the gun fire ceased. Several of the congregation were injured. Three were dead...”

The book also includes the original article written by the then young journalist Austin Hunter who was first on the scene - it appeared in the News Letter the following morning. Terrorism was rife in Northern Ireland and part of everyday life (there was barely a day that passed without a tragedy) but this particular incident united communities as distressing images of the aftermath were beamed around the world. In the days that followed, Darkley mourned its dead, and people struggled to come to terms with the tragedy.

The book shows that, despite one massacre and two fires in the church which failed to uproot or even shake the people, that their spirit was never wounded, but instead, the congregation continues to remain faithful and praise God for His mercies and goodness.

Fire On The Mountain by Pastor David Bell is published by Ambassador International and is available from Amazon and all good book stores.

Thanks for posting this. There is so much recent history in the UK that most British people are unaware of.

Wow! Gilly. A great article telling of hope in the face of adversity. Well done Mary

I remember the Darkley massacre, I was living in Ireland at the time. It was one of so many tragedies. Thanks for sharing this. I'd love to read that book.