Debut Author Paula Daly tells us how Stephen King gave her the drive to write a book that created a bidding war!

Paula Daly's debut novel, the gripping crime thriller "Just What Kind of Mother Are You"  is the reason there has been no sleep, little cooking and NO ironing in our house recently.  And you have only to read all the Five Star reviews on Amazon to know that I'm not the only one.

The story strikes a chord and fear into mothers the world over; your daughter's friend is missing and you were the one who was supposed to be looking after her. "Un-put-downable" doesn't do it justice. 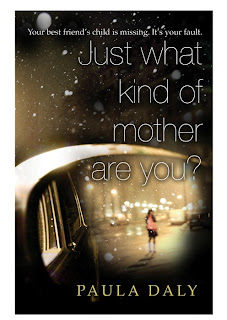 So... I can't tell you how stupidly excited I am to be introducing our Guest Author today.... and here Paula reveals what every aspiring author is desperate to know... how did it happen?  How did you arrive at the Station called Success?

"You know the saying – you should only write if you cannot live without writing? Well, that wasn’t me. I belonged to the group of perhaps millions of people who longed to be writers so they could give up the day job.

What could be better than sitting by the fire on a cold, wet February afternoon being paid to make up stories?

Trouble was, I had no idea how to write. Or even how to start. I didn’t have anything to say, and wouldn’t have known how to say it even if I did. I had not studied English since I was sixteen, I was a physiotherapist, and I wasn’t even certain how to punctuate dialogue correctly.

Then my friend called and said she was reading StephenKing’s book ‘On Writing’. She told me to read it, which I did, and the next day I started writing. His book gave me the confidence to just give it a go and write anything that came into my head. Suddenly I found I had more than enough to say. In fact, I couldn’t stop. I had paper all over the house and wrote whenever my youngest child would allow.

After around six weeks of short stories I felt ready to tackle a novel. No idea what I was doing - I thought I’d start writing and see what came out.

What came out was a rather silly, frivolous psychological thriller. Not good enough to be published, but good enough to attract the attention of an agent who said, “We don’t want this. Write your next novel and we’ll see how you do.” I tried telling her I didn’t really know what I was doing, that I didn’t know HOW to put a novel together, but she assured me I could do it.

That next novel was turned down by all major publishers. A near miss, they said, but deep down I knew it wasn’t good enough. Writing is a skill that takes time to learn. I was fully prepared for it to take the same amount of time as a degree course - my reasoning being that I was retraining for a job, and any skilled profession takes at least 3 to 4 years of full time study.

Eventually, I struck lucky. JUST WHAT KIND OF MOTHER ARE YOU? came together once I found a great premise and figured out my characters’ motivation. Once submitted it prompted a bidding war between six major publishers and to date has sold in eleven territories.

I’m still not sure I know what I’m doing, but at least now I realise neither does anybody else."

Thanks for stopping by Strictly Writing, Paula.  We all wish you every continued and deserved success with 'Just What Kind of Mother Are You' and I for one cannot wait for the next book!
Posted by Debs Riccio at 06:30

What an lovely, inspiring way to start the working day! Congratulations, Paula. You must have been absorbing ideas before you started writing, and it's great to hear that persistence (and a willingness to listen to feedback) can pay off.

Very inspiring, Paula and just goes to show that authors are human too and have the same feelings of self-doubt as anyone else. Well done.

I read this on holiday a couple of weeks ago and couldn't put it down! Inspiring to read how it came about.

Phew.....! I've just finished reading it - the BEST book I've read in a LONG time (and I'm not easily pleased). Thanks so much for guesting - now hurry up and get that other one on the shelves please! :)

Thanks everyone! And thanks for the opportunity to appear on strictly. Good luck with your writing. Paula x