Meg Rosoff was born in Boston, educated at Harvard and St Martin’s College of Art in London, and worked in New York City for ten years before moving to England permanently in 1989.  She worked in publishing, journalism, politics and advertising before writing How I Live Now (which is due to be released in 2013 as a feature film starring Saoirse Ronan). Her books have won or been shortlisted for 18 international book prizes, including the Carnegie medal and the Orange first novel prize.  Meg’s most recent book is There Is No Dog.  Picture Me Gone, her sixth novel, will be published in March, 2013.  She lives in London with her husband and daughter.  www.megrosoff.co.uk. 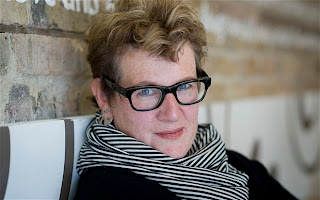 Which 3 writers, living or dead, would you invite to dinner?
Hilary Mantel, Chaucer and A. A. Milne

What's your favourite writing snack?
The entire contents of the fridge and pantry.  I'm painfully indiscriminate.

Longhand or computer?
My daughter accuses me of loving my Mac more than I love her.  But that is so, so wrong.  I love her marginally more, and anyway am thinking of upgrading.  The Mac.

Win Booker prize or land Hollywood film deal?
Booker prize, definitely.  I love the idea of a YA book winning the booker prize.  Imagine the outrage!

Tabloid or broadsheet?
Broadsheet in theory, but I'll read the Sun with wide-eyed wonder if I find it on a bus, and recently I've given up daily newspapers for The Week, which I love.
I feel guilty abandoning The Guardian but I find reading the news every day horribly depressing.  Too much unhappiness in the world.

Independent bookshop or Amazon?
Indies for the interesting surprising fabulous wondrous books I would never have thought of buying on my own (or the rare and wonderful, like Cowper Powys' Weymouth Sands, which I'm reading now); Amazon for Bringing Up The Bodies or the Ottolenghi Cookbook; Book People or Red House for the occasional children's book I haven't been sent but feel obliged at least to look at; and Oxfam bookshops always -- often for books I'm curious about but not enough to pay full price, or a second or third copy of something I love (to give away), or for another copy of the book I loaned and will never get back.  I can't pass a charity shop without nipping in for a look and love the element of chance.  I kept meaning to buy Skippy Dies, found it in my local Oxfam, and will start it soon.


Hacker or adder?
100% both.  I start with a very slight outline, pad it out, cut it back, pad it out, cut it back....  My very last act in any book is to remove a thousand or so words from the final draft.  It always helps.  And I nearly always hack as I read as well -- except for the very few writers who don't use far too many words.

Plotter or panter?
I can't plot my way out of a paper bag.  I depend on my characters to tell me a story and if I'm very patient and lucky, they do.
Leave on a cliffhanger or tell all?
I certainly don't tell all. My method is to leave the ending just ambiguous enough so that the pessimists end up depressed, and the optimists say "I'm sure they'll be alright in the future".  It's my own personal little Rorschach test.
You really must read…
I read through the entire Virago list in my 20s.  I don't think I'd have survived without them.

I get most excited by…
Really brilliant extraordinary books that I know I couldn't have written.  It's thrilling to discover a life-changing book.

If I wasn’t a writer I would be…
That should be, if I weren't a writer.  I think I'd be a pedant.  Oops.  I already am.
In that case, I'd like to be a world class dressage rider.

An author should always…
Write fiercely.
Posted by Caroline Green at 06:00

Enjoyed this ... and the diversion while following a train of other sites ...

Thank you Meg! I am surprised you are the first to ever spot the grammatical error in that question. Obviously we only put it in a test. Obviously.

Thanks for stopping by Meg, and best of luck with your projects. Can't wait to see Saoirse Ronan in the role!

Well done Caroline on snagging our guest and thanks for making time for the blog, Meg. Having seen how freely you enter into the spirit of the Q&A, I'm brimming with oodles of other questions such how your writing has changed and what you'd do differently if you were starting out now. But I guess they'll have to wait until another time. All the best with your endeavours.

*to* test, Caroline, surely? ;)
Brilliant post, brilliant answers, can't believe I shared the same space as Meg Rosoff however briefly, however tenuous. Fab. off to Google Saoirse Ronan - 'How I Live Now' still lives with me.

How I Live Now was the first book to turn me onto the YA genre. It made me realise it could deal with really important issues in a subtle way, rather than be all attitude and action. Lovely to hear what you have to say Meg.