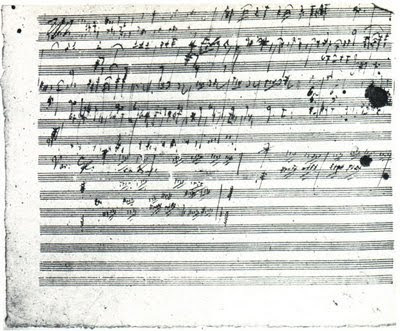 Last Wednesday seven women gathered in a cottage on the edge of a frosted wood. No, its not the beginning of a fairy story, we really did. The class I teach would have been disrupted by builders re-roofing our house so we swapped venue and met at the home of one of my students. That she lives in a Victorian cottage surrounded by woodland, and the world was lit by a heavy coating of frost simply helped. We were starting the proprioceptive writing together and it seemed an auspicious mood in which to begin.

I lit the candle, feeling a little silly, as though I was trying to add some false solemnity to what was, after all, merely a bit of scribbling amongst friends. Then we put Bach’s Goldberg Variations on the CD player and began. There was the usual short spell of kerfuffling – whispers, sneaked biscuits and giggling, and then the music pealed out loudly over all of us, surprising us. We turned it down, picked up our pens and wrote. And wrote and wrote and wrote.

There was a hush over the class I’d never encountered before. They are all talented writers and more than capable of getting down to work but usually there’s a constant low hubbub of biscuit snaffling and sighing, pen chewing and trotting off to the loo. The directive was simple: listen to the voice inside your head and write down what it is saying. Process what it says, in a kindly, inquisitive manner, probe what it really means. Keep listening and recording, not directing.

Today there was a consistency in both their concentration and their energy. It seemed easier for them than usual. And it certainly was for me. The breakthrough was the use of the Proprioceptive Question (I know. Such a pompous title but if we ignore the surface bluster and dig at what’s underneath, it’s gold.) The question you keep repeating is: What do I mean by X and you ask it every time you get even the tiniest hiccup or glitch in the flow of your thoughts.

This to me is the core of Proprioceptive writing’s magic: it’s the Editor gently inquiring of the Creator: Can I help? I’d like to help. The Ed is a right old School Monitor. Gets all uppity if it hasn’t a job to do. And Very Doesn’t Hold with the Creator romping around adding bits here and there and jumping ahead ten scenes because scene 13 is more fun to write than scene 4. The Ed stamps on such frolics, with a Can’t Play Won’t Play attitude and refuses to co-operate. The result: writer’s block. But here, the trick is to make Ed and Creator bezzy mates from the outset. It works.

Occasionally I looked up from my page, feeling guilty that I was getting so much from it myself when I was there to teach. But all heads were down, all pens were moving at exactly the same pace. We were writing to the rhythm of Bach’s music, which matches the rhythm of our own pulse, our heart rate: he composes to the rhythm of our bodies. So body and mind were in harmony. How often can we say that about writing? How often are we cramped in a chair, trying to ignore backache and numb thighs and twinges of RSI? Forgive me if this sounds whacko, but the energy in the room was clear – as if made of crystal or bright water. And the candle? I glanced at it once or twice when the Teacher in me broke concentration to see if everyone was OK. Its light was soft and intense – a simple focus back to the job in hand. So if you try it, don’t skip or customise it. Light that candle, play that Bach, listen attentively to the voice inside and copy down what it's saying. Prepare to be delighted.

Oh bother, my long reply to your lovely blog got lost in the ether. This sounds wonderful. A friend has really changed since he built himself a 'listening room' and spends many hours listening to the music he loves. I think the vibrations get into your body and sort of re-align them.
Susiex

I am off to find a candle and some Bach... Thanks S

This sounds wonderful and I love the image of you all scribbling away in a woodland idyll..

Oooh I was right there with you - am going to have to find some Bach right now. Love the whole concept - and the music being in tune with the body...am now thoroughly intrigued.

We did it again last night and again this morning. Today a whole novel plot fell out of my pen, from nowhere. It was incredible.
One odd thing - I've noticed everyone writes very neatly but quickly - it's something to do with the rhythm. The pen doesn't run away with you like it does in morning pages. It's steady but unstoppable. Wonderful stuff.

I'm intrigued by the use of the term proprioceptive, though, as I understand it to mean the body's sense of itself - weight, balance, relationship. The sixth sense, I call it...