Fear and Loathing in North London 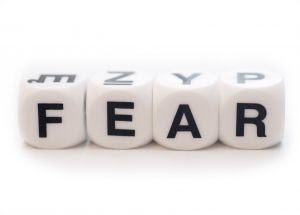 I slide into the room, back pressed to the wall. My heart is clattering, my breathing is shallow and my palms are sticky. Dots are dancing in front of my eyes, but my senses are on high alert to the slightest movement. It looks safe…but wait, what’s that in the corner? Did something move? Got to be certain. When I’m convinced the coast is clear, I make it to the bed and collapse, exhausted.
I made it. Until the next time….

I spend most of September peeking around doorways before entering a room. Since the time I stepped on one of the critters with my bare foot as I was getting into bed [How big was it exactly, you ask? Let’s just say it wasn’t inconvenienced by the full weight of an adult woman] my already irrational fear has reached epic proportions.*
Yes, yes, I know. I should do one of those phobia courses at London Zoo. I write about this kind of stuff for a living, for Chrissakes. But I also know that you end up stroking tarantulas at the end of the course and I will never do that without general anaesthesia [me AND the spider would need to be knocked out].
Don’t think for a minute our eight-legged enemies are my only irrational fear. Oh no. I’m also frightened of fast rides, deep water and confined spaces. I’m not wild about flying. I’d always rather drive than be driven. Oh and I have a bit of a phobia about fish bones and choking. I know I’m not the only one like this. One friend is frightened of lifts and my sister visibly shudders at the very sound of the word ‘frog’.
But creeping around the house like a loon the other evening left me feeling deeply ashamed of my arachnid-based wussery. And then I started wondering whether courage has different faces.
The first time I slipped some of my writing into a big brown envelope and posted it into the big wide world, I felt a rush of adrenaline as though I’d just done a bungee jump [not that I'd know what's that like, but you get the picture]. When the same envelope came back through my letterbox with a standard rejection slip, it really hurt. And again, and again, many times over the last few years. I haven’t developed any kind of a thick skin. It hurts like buggery every single time, so much that I’m sometimes convinced I can’t put myself through this agony again. Maybe I am deluded or mad for trying but each time the punch in the guts comes, I seem to pop back up again, just like one of those Weeble toys from childhood.
So does this take a certain amount of courage? I think perhaps it does.
‘Tread softly because you tread on my dreams,’ said WB Yeats. ‘Weaseling out of things is important to learn. It’s what separates us from the animals…except the weasel’ said Homer Simpson. So if you don’t weasle out of every challenge and you lay your dreams where they may get trodden on, give yourself a big pat on the back right now. You’re just as brave as someone who can stroke a tarantula or bungee jump.

* Please don’t see this as in invitation to share your worst spider stories. I beg you to keep them to yourselves.
Posted by Caroline Green at 06:00

I do sympathise. I could do you a list of the things I'm afraid of and I've always considered myself pretty cowardly.
But you're right! I do send my stuff out there. It does come back a lot of the time. And I do keep going. Even though it hurts. That is brave, isn't it? Yippee!
Thanks for the reminder.

Fab post - as a fellow spider-fearer and general phobic, I do understand. In the gallery the other day a woman and I spoke of Spider Season. As soon as the first chill of autumn comes, so do They. 'They KNOW,' she said, and I think they do.
I don't know if it's courage for me, in sending out more subs - I think it's more a kind of blind, reckless hope/optimism! But it takes courage to continue to write in the face of rejection.
May your spiders be few, and small.

Thank you Bernadette and Susie!

After writing this the other evening, I saw my first biggie of the season :(

Why do they always lurk in my bedroom? It's the worst possible place to find one...

Unleashing your work into the world is very hard. It takes masses of courage.
But once it's done, it becomes like anything - perfectly do-able, if not enjoyable.
And there comes a point in every writer's life when you have to do it if you seriously want to improve because feedback, be that from a writers group, a forum, or an agent is the only way to begin seeing your work outside of yourself.
If you tell yourself that others telling you what is wrong with your work is the only way of putting things right, it feels more positive. Still scary, but in a good way.
HB x

Okay, so i won't tell you about the time my mum woke up with a spider over her mouth.

Brilliant post, Caroline - writing is all about confronting one's fears. And some times our worst fears do come true, ie rejection - but slowly, over time, this helps us get perspective, i feel. It is never pleasant but - speaking personally - after the intital shock isn't quite so traumatic as it once was.

or rather IT isn't quite so traumatic.

Aarrghhh - must get a new keyboard soon...

Great post Caroline. Talking of fears - I often fear that the act of sending stuff out time and time again only for it to be rejected - is just an act of maddness - but from this time hence I'm going to try to think of it as an act of courage instead - so thank you.

RE:The comment on the spider in the mouth - too much information. I wasn't even phobic before but now I think I just might be.
Jo

Sorry, Jo! If it makes it any better, mum had hayfever and slept with her mouth open - i doubt that would happen to anyone else...

Sympathies. Your fear of spiders sounds like my fear of subbing. I'm in awe of Sam and you - anyone who regularly sends work out. Has to happen but is very much worse than cuddling a tarantula because it has to happen over and over again to get worthwhile results. (Unless you're HB ;) ! )

Caroline, I wish I could come and delicately remove with a tissue every spider that enters your house; likewise every rejection slip (though I'm much more aggressive with those - I like to stamp on them and then rip them to shreds).

Thanks Emily...yes, I'm sadly also saddled with too much guilt to kill the buggers. Rejection letters on the other hand...

And I won't tell you my spider story because it is too, too horrific. Have to say, I have no compunction about killing them. It's me or them, basically, and the hoover is the only way to go in some situations

Oh, I love spiders. But I am afraid of a lot of other things. Primarily bank statements and letters from the tax office.

But it does take bravery mixed with a streak of foolhardiness, to sub.

You love them, Geri? You LOVE them?

Poppy, I fear I accidentally read a post by you on that subject on Writewords a while back! I instantly regretted it...!! :)